I came accross these pics of winners on Sidi shoes. Who says the Trek and Specialized have better shoes. As far as I can see, the majority of the pro riders use Sidi road shoes. Here is portion of the a press release of the athletes at the starting line for Milan-SanRemo.

“Sidi will be at the starting line with a string of three victories backing us up: Filippo Pozzato, Oscar Freire Gomez and Fabian Cancellara all won their respective races in 2006, 2007, and 2008. Sidi Sport athletes will have a lot to work! Among the most anticipated are the three kings of sprintAlessandro Petacchi, Daniele Bennati and Robbie McEwen. Add to this roster Filippo Pozzato and Philippe Gilbert, there to give it their all both in breaks and in attacks on the Cipressa or Poggio climbs. Expert riders like Danilo Di Luca and Davide Rebellin will also be ones to watch.” Sidi Cycling, Press Release, March 18th, 2009. 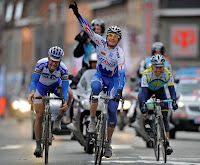 Here is a second pic of Joaquim Rodriguez winning with a pair of Sidi Genius 6.6 Carbon’s. 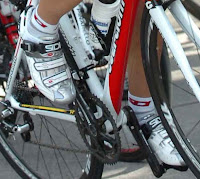 Not bad at all for a couple weeks of effort in March.