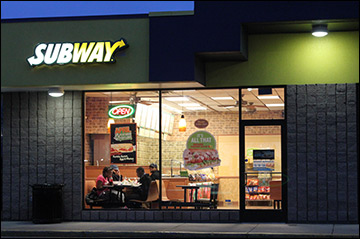 Subway, one of the world’s biggest bread bakers, is about to remove a chemical from its breads that raised the ire of an influential health activist and food blogger.

The world’s biggest sandwich chain says it’s in the process of removing the chemical known as Azodiacarbonamide from its sandwich breads — a chemical that Vani Hari, who runs the site FoodBabe.com, says is commonly used to increase elasticity in everything from yoga mats to shoe rubber to synthetic leather. It’s used for the same reason in bread, she says, as a dough conditioner.

“We are already in the process of removing Azodiacarbonamide as part of our bread improvement efforts despite the fact that it is USDA and FDA approved ingredient,” the company says in a statement. “The complete conversion to have this product out of the bread will be done soon.”

Days before Subway announced its change of heart, “Food Babe” Vani Hari appeared on the Alex Jones Show to discuss her new initiative, after discovering that Subway makes bread with an ingredient called azodicarbonamide – a chemical also used to make yoga mats and shoe rubber.