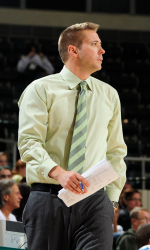 Marquette University’s head volleyball coach, Ryan Theis, will be discussing the importance and role of preparing the days before the actual event. Areas covered include: the role of the coach, the role of the athlete and how communication melds the two together.

For the complete interview, visit The McCarthy Project on Blog Talk Radio.

Ryan Theis was named the fifth head women’s volleyball coach in Marquette University history on Feb. 14, 2014. Theis, a 2000 University of Wisconsin-Milwaukee graduate, returns to Milwaukee after a six-year tenure at Ohio University, where he led the squad to a record of 144-54 (.727). That mark places him third in the history of the Mid-American Conference and 18th among all active NCAA Division I head coaches.  two-time MAC Coach of the Year (2009 and 2013), Theis mentored three AVCA All-Americans during his tenure in Athens and helped 13 players earn all-conference accolades, including three conference player of the year selections. Full Bio and contact information