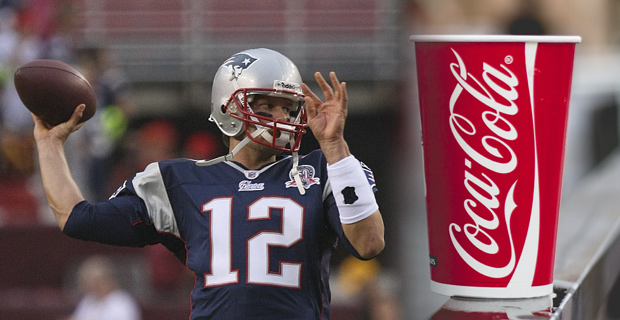 “You probably go out and drink Coca-Cola and think, ‘Oh yeah, that’s no problem,’” he said on the Dennis & Callahan Morning Show. “Why, because they pay lots of money for advertisements that think that you should drink Coca-Cola for a living?”

“No, I totally disagree with that and when people do that, I think that’s quackery, and just the fact that they can sell that to kids? That’s poison for kids.”

Regular coke does contains high-fructose corn syrup, which has been linked to a variety of health problems including high blood pressure and obesity.

But Brady didn’t just attack coke: he also questioned whether Frosted Flakes is “actually a food.”

“You keep eating those things and you keep wondering why we do have just incredible rates of disease in our country,” the quarterback said.

“Another reason to avoid fructose is that its most common form, high fructose corn syrup (HFCS), is derived from genetically modified corn,” Sarich pointed out. “That means it was developed in a lab, not grown and milled before it ended up in your table.”